Like all multi-lingual computing, Arabic computing is now firmly in the domain of Unicode. Unicode is an industrial protocol with the status of international agreement. It is designed to encode the elements of all known script systems in such a way that they become interchangeable between programs and operating systems. Its implementation is well underway.

Unicode eliminates the need to tamper with fonts to get special characters, but it is not a font. For legible text on screen and paper, Unicode depends on compatible fonts with the required characters, where necessary with additional dedicated font technology.

Arabic alphabet is related to the Latin alphabet, as can be seen from its historical sorting order A/ALEF, B/BEH, C/JEEM, D/DAL:

Its modern sorting order is on the basis of similarity of the letters:

The modern morphological order can be broken down as follows:

There is a number of letters, mostly skeleton-cum-mark combinations, that do not have independent status in orthography or sorting order:

The hamza diacritic and its various supporting letters

Traditionally, a repetition of the vowel marks is used at the end of a word to indicate that the indefinite article /-n/ is attached to the vowel:

Unicode deals with repeated vowel markers as if they are separate characters. This is a legacy from the metal typesetting era, when it was impossible to compose such minute superscript or subscript groups:

FATHATAN to mark the vowel /a/ +n

DHAMMATAN to mark the vowel /u/ +n

Efficient, streamlined connections assimilate letters into continuous groups to form words. Assimilation frequently takes the form of mergers. The merger of some letter groups can be so strong that letters lose their individual characteristics and instead contribute a distinctive feature to a kind of ideograph. In other words, the writing system becomes almost synthetic in nature, although it evolved from an analytic alphabetical structure:

For technical and pedagogical reasons, there is a strong tendency to eliminate or simplify the connectivity of Arabic script; still even the simplest fonts maintain a minimal degree of connection between letters. This approach removes from Arabic script its synthetic, ideographic quality and turns it back into the analytic alphabet from which it evolved:

Most Arabic letters consist of a skeleton, e.g. a curve, and a marker:

Markers have a distinctly graphemic function. They combine with various skeletons to form other letters, e.g. the dot-above is used by eight Arabic letters:

In the conventional analysis, some skeletons have no independent meaning, e.g.:

Other unmarked skeletons by themselves are already meaningful letters that differ from the ones characterized by a marker, e.g.:

pro’s and con’s of the conventional analysis

Pro: Considering the combination skeleton and marker a single letter has advantage that:

Con: For scholarly work, the merger of skeleton and marker denies the evolutionary stages of the script, where the use of markers was casual, in a way similar to the use of vowels. Therefore, modern industrial encoding as inherited by Unicode has the disadvantage that:

In manuscripts and even in older prints, markers are often incomplete or unreliable because markers were secondary, often redundant elements; or because markers were added later to interpret or eliminate ambiguities; because double markers sometimes co-exist to maintain original ambivalence.

A complete and unambiguous element of script is called a grapheme. Without markers, most skeletons become multi-interpretable, e.g. all these words share the same skeleton elements:

In historical texts any one of them can look like this:

In this kind of spelling the skeletons are not “defective” graphemes, but valid archigraphemes. An archigrapheme is the common element(s) between two or more graphemes, minus the marker(s) that disambiguate them. The majority of historic texts are written with archigraphemes.

Unicode does not – yet – have the data structure to deal with archigraphemes and discrete markers as meaningful text elements.

However, in a few cases this correspondence is not stable:

There can be more than one way to encode a single grapheme, e.g.:

The Arabic grapheme YEH WITH HAMZA ABOVE can have multiple encodings, which causes inconsistent usage:

More than one grapheme for a code, e.g.:

This inconsistency is not a feature of the Arabic writing system, but a consequence of the legacy approach adopted by Unicode. Accepting all graphemic markers as independent secondary characters with their own code points would make these cases unambiguous. The template for this solution already exists: in the latest version of the Unicode Standard, the combination of composition elements ALEF and HAMZA ABOVE has been declared canonically equivalent to the legacy pre-composed grapheme ALEF WITH HAMZA ABOVE:

U+0623 ARABIC LETTER
ALEF WITH HAMZA ABOVE

In Arabic the abstract, nominal graphemes are represented by context-dependent allographs. Simplified support for Arabic handles contextual allographs according to two patterns, discontinuous and continuous assimilation:

Graphic assimilation of Arabic letters is a sophisticated art – and the foundation of Islamic calligraphy – which produces well-designed and pleasantly legible script images. Without a thorough understanding it cannot be supported. E.g. in initial position, BEH coverage can get quite elaborate in naskh:

In metal-based typography and nostalgic computer fonts, only an inconsistent number of random ligatures remain of the original system:

Here are two additional aspects of Arabic script that have consequences for rendering systems:

The traditional connection is still reflected in a number of ligatures.

Spelling and font technology have mutually influenced each other since the fast emergence of computer technology for Arabic script. The fast development of font technology has the unintentional result that different fonts may require different spellings for the same printed image. For instance, most fonts cannot deal with al-lāhu, “God”:

For comparison, the correct image representing the above data structures:

For comparison, the correct image representing the above data structures:

A font is an industrial product designed to enable handling Arabic with technology that is not designed for Arabic. In the design process, Arabic is an object that can be adapted at will: corners can be cut and rules can be broken. The resulting script can be seen as an “innovation”.

The term script synthesis describes the effort to analyze and synthesize traditional calligraphic styles or high quality typesetting systems. In this approach Arabic is the subject whose integrity needs to be preserved when it is reproduced in digital form. Here the underlying technology is the innovation.

Some of the most frequently seen typefaces only allow limited, unvowelled use:

Encoding Script for the Arabic Language

Unicode uses a model resulting from earlier conferences about Middle Eastern computing: contextual shapes of one and the same letter are all attributed to a single nominal text code. This is the graphemic model:

There is single logical representation regardless the visual complexity of the assimilations, mergers or ligatures

Today there is no limitation to the number of characters that can be handled simultaneously by a computer system, while the original purely synchronic, limited scope has changed into a diachronic and comprehensive ambition. Unicode is being extended with additional characters to handle literary orthography, archaic orthography, as well as contemporary Qur’anic orthography.

Historical Qur’anic orthography is fully archigraphemic and therefore not supported by Unicode graphemic model. This serious defect is curiously matched in Arabic studies by the absence of an authoritative critical text edition documenting the transmission through the ages of this key historic text.


Encoding Arabic Script for Other Languages

The Arabic character set has been expanded over time to cover speech sounds not used in the Arabic language. Practically always the existing archigrapheme-cum-marker template is used, e.g.:

Various user communities of the Arabic script have specific calligraphic traditions that result in preferences for certain fonts or script styles. For instance, the preferred way to write Urdu is a subtle Persian simplification of Arabic called nastaliq script1:

The same text in alien simplified naskh would not be acceptable:

There are instances where one and the same Arabic letter received a different encoding because a regional calligraphic style shaped it differently than the ubiquitous naskh. A case in point is the Arabic letter KAF, which in nastaliq has an extra swash in the final forms. Unicode now has an extra code U+06A9 KEHEH, causing identical letters to be encoded with language dependent codes. As a result, two out of the three letters of the place name MECCA are not interchangeable between various Arabic-scripted languages:

Orthographic: in addition to word-separating spaces and final forms, hyphenation is used for line-breaking, just like in Latin-based orthographies: 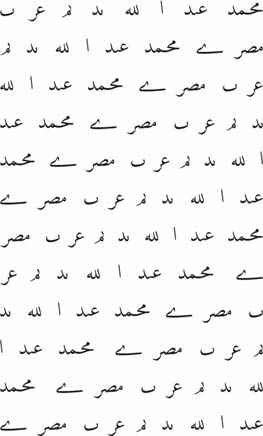 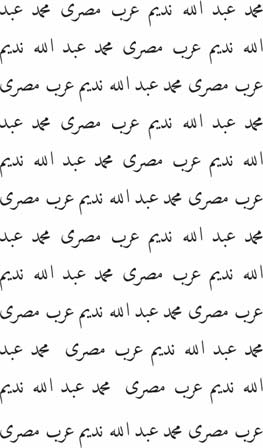 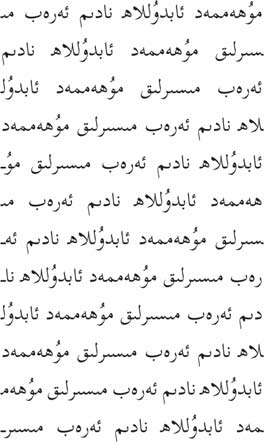 NOTA BENE: so far only pattern b is documented and supported by Unicode.

The languages section of this article has been edited. To view, please visit: Arabic Script Tutorial by Thomas Milo.


1 bharam khul ǧāʾē ẓālim tērē qāmat kī darāzi kā - agar us tura ē pur pēč ū ḫam kā pēč u ḫam niklē“O tyrant, the mistake about the tallness of your figure will be rectified - if the curls and twists of your hair full of curls and twists are straightened out” (Ġālib, quoted in Finn Thiesen, A manual of Classical Persian Prosody with chapters on Urdu, Karakhanidic and Ottoman prosody, Wiesbaden 1982, p.188)